Posted on November 25, 2011 by The Catholic Populist 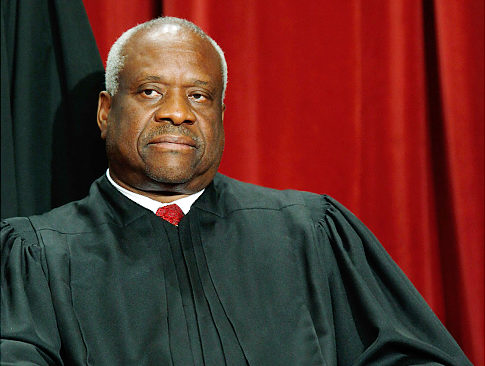 Three were wrong.  One was right.

Antonin Scalia, John Roberts, Samuel Alito, and Clarence Thomas either view themselves or have been interpreted as Originalists.

That means that they view the Constitution to varying degrees through the lens of the original intent of the framers.

But how to interpret the intent of the framers?

Clarence Thomas has most consistently supported the view of the founders that the Constitution was viewed by the founders as a compromised document whereby they made a compromise with the founding sin of the US — slavery — in order to form a union.

This was made, according to Clarence Thomas (and Abraham Lincoln) by creating an America armed with the tools of putting slavery and other violations of Natural Rights on the path to extinction.  In other words, the framers viewed the Constitution as a binding document that served as a bridge on the path towards creating a Union that implemented the principles of the Declaration.  This has many implications, the most important of which is that the Constitution should be viewed through the lens of the Declaration.

Unlike Clarence Thomas, Antonin Scalia has often drifted into strict constructionism, a constitutional philosophy that ignores founding intent and the original meaning of the words of the Constitution itself.  Justice Scalia calls this “soft originalism.”

In Brown v. Entertainment Merchants Association, a California Law that banned the sale of violent video games to minors without parental consent was struck down as unconstitutional.  The majority decision was written by Antonin Scalia and joined by Anthony Kennedy, Ruth Bader Ginsburg, Sonia Sotomayor, and Elena Kagan.  A more cautious concurrence was written by Samuel Alito and joined by John Roberts.

Stephen Breyer wrote an uninteresting dissent that was not at all Originalist.  Clarence Thomas wrote a truly Originalist dissent well worth reading.

In it, Justice Thomas defends the idea of parental sovereignty — an idea that has its roots in “the Laws of Nature and of Nature’s God” cited in the Declaration of Independence.

Natural Law philosophy, the dominant philosophy of the Puritans so frequently cited by Thomas in his dissent, believed that parents were responsible for the moral upbringing of their children.  Anything that hinges on morality — such as violent video games — would fall first and foremost into the domain of the parents who had brought the children into the world and thereby inherited the moral responsibility for raising them.

The fact that the federal government is striking down laws designed to empower parents with the authority they need to raise their children would be shocking to the founders.

The First Amendment’s protection of free speech hinged on the way that the Founders understand the word free which they frequently contrasted with licentious.  Freedom or Liberty is the ability to good not the license to do moral evil.  Whether a particular video game had moral issues or not is certainly not for the government to decide.  However, the fact is that California was seeking to put more tools into the hands of parents.  If parents do not have the authority to raise their own children, the free exercise of religion is not real.  Any free exercise of religion entails the ability to evangelize.  And while evangelization can occur in the public sphere or in the church, it occurs first and foremost in the home with the evangelization and moral upbringing of one’s own children.

And the federal government struck it down, saying that the state and parents in this collaboration are violating the free speech of children.  Such speech is not necessarily free.  It may, in certain instances, be licentious.  In such instances, it is not protected by the First Amendment.  Thomas is absolutely right and Scalia is utterly misguided.

Parents should have the leeway to manage the moral upbringing of their children.  Period.

Parental sovereignty is fundamental to the free exercise of religion.