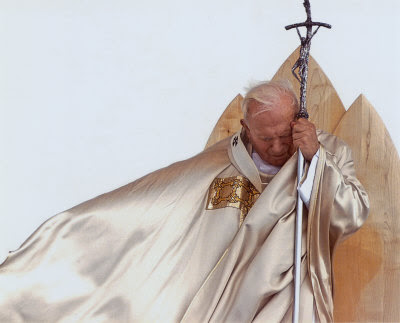 Currently, a debate is raging in Congress with three possible outcomes. Should the federal government cease to fund Title X, which Richard Nixon designed as an enormous federal contraception and sexual outreach and education fund (the GOP budget)? Or should we continue to fund Title X but prevent abortion giant Planned Parenthood from watering their trough at this appetizing slush fund (the Pence Amendment)? Or should Title X and Planned Parenthood funding continue unabated (the Harry Reid demand)?

Many have argued that funding Title X actually reduces abortion because, the logic says, more contraception leads to less abortions. Therefore, the pro-life position would be to fund Title X.

Two strongly opposed interest groups who disagree with this assertion are on the one hand Planned Parenthood and the abortion industry and on the other hand John Paul II’s Encyclical Evangelium Vitae and the Vatican. Planned Parenthood bases its conclusion on its internal research while the Vatican bases its position on theological and philosophical insight.

When the Pope and Planned Parenthood both agree that contraceptive availability increases abortion, the issue should lie very much beyond dispute.

“It is frequently asserted that contraception, if made safe and available to all, is the most effective remedy against abortion. The Catholic Church is then accused of actually promoting abortion, because she obstinately continues to teach the moral unlawfulness of contraception. When looked at carefully, this objection is clearly unfounded. It may be that many people use contraception with a view to excluding the subsequent temptation of abortion. But the negative values inherent in the “contraceptive mentality”-which is very different from responsible parenthood, lived in respect for the full truth of the conjugal act-are such that they in fact strengthen this temptation when an unwanted life is conceived. Indeed, the pro- abortion culture is especially strong precisely where the Church’s teaching on contraception is rejected. Certainly, from the moral point of view contraception and abortion are specifically different evils: the former contradicts the full truth of the sexual act as the proper expression of conjugal love, while the latter destroys the life of a human being; the former is opposed to the virtue of chastity in marriage, the latter is opposed to the virtue of justice and directly violates the divine commandment “You shall not kill.”

But despite their differences of nature and moral gravity, contraception and abortion are often closely connected, as fruits of the same tree. It is true that in many cases contraception and even abortion are practised under the pressure of real- life difficulties, which nonetheless can never exonerate from striving to observe God’s law fully. Still, in very many other instances such practices are rooted in a hedonistic mentality unwilling to accept responsibility in matters of sexuality, and they imply a self-centered concept of freedom, which regards procreation as an obstacle to personal fulfilment. The life which could result from a sexual encounter thus becomes an enemy to be avoided at all costs, and abortion becomes the only possible decisive response to failed contraception.”

From the proponents of the Sexual Revolution and the Abortion Industry:

“Sexologist” Alfred Kinsey, 1955: “At the risk of being repetitious, I would remind the group that we have found the highest frequency of induced abortions in the groups which, in general, most frequently uses contraception.”

Abortionist Malcolm Potts, the former director of Planned Parenthood of England, 1976: “As people turn to contraception, there will be a rise, not a fall, in the abortion rate…”

Abortionist Judith Bury, 1981: “There is overwhelming evidence that, contrary to what you might expect, the provision of contraception leads to an increase in the abortion rate.”

Now, a 10-year study, the largest of its kind (based in Spain), has concluded that increased levels of contraception increases sexual intercourse at a rate that drives up abortion rates by overcompensating for the decreased conception rate per sexual encounter.

Mike Pence has been the greatest warrior in this fight — unceasingly battling to prevent taxpayer dollars from funding abortion providers like Planned Parenthood.  For that, we cannot thank him enough.

However, Mike Pence has in-advisably jumped into the fray and announced he is a big supporter of Title X funding — as long as the money is not serving the interests of Planned Parenthood or the abortion industry. He should take a closer look at the scholarship and Theology. Title X inherently benefits the abortion industry by driving up customers both through its contraception and its radical sex education programs (a whole different issue).

With such a strong consensus that contraceptive funding increases abortions and such consistent rhetoric that we want to decrease abortions from both Republicans and Democrats, the way forward is clear. Defund Title X and Planned Parenthood!