On the Incompetence of Ben Bernanke 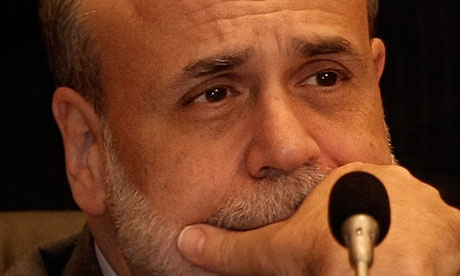 Is any man fit to manage the global economy?

To be fair, Ben Bernanke seems like a nice guy.

But his policies have been nothing short of disastrous.

Those of us who come from a neo-scholastic or Austrian viewpoint on economics already believe that no one man has the insight and the moral strength to run the economy.  We believe that insofar as possible the populace should be entrusted with their own affairs including in the area of monetary policy.

Instead the Federal Reserve — a Big Bank and Big Government hybrid — is making the decision on what interests rates should be in this country and how much liquidity this country should have.

The United States has the obvious blessing and the not so obvious curse of managing the reserve currency of the world.  The dollar is the backbone of every economy in the world and the value of the dollar is determined solely by fiat — the belief that pictures of George Washington and Benjamin Franklin have value.  As a result of this privileged position, demand for the dollar spans the globe.  As volatile as the US dollar has been, it still remains far more stable than any alternative country, which in many cases have made even more incompetent decisions with their currencies than we have.

The United States will never become like Greece as some conservatives hyperbolically claim.  Instead, the United States can continue to run on ever-mounting deficits as far as the eye can see.  If no foreign creditor wants to buy our bonds any longer, our own central bank (the Fed) will buy them for us.  Of course, this causes inflation, which serves as the greatest tax on savings ever devised.

Because the Fed is printing dollars that all economies rely on for stability, in many respects the Fed is managing monetary policy for the globe.  Of course, the problem is that the Fed is managing with American interests first and foremost so it is not as inherently concerned with its outsized global influence as it would be if it was officially the reserve bank of Planet Earth.

The Fed is already infamous for over-managing the economy and pushing it towards the housing and .com bubbles.  The Fed typically creates bubbles by artificially doing something to the money supply.  Currently, the Federal Reserve is making huge artificial interventions in the market that are going to surface (and have already begun to surface) in unexpected parts of the economy.  The more “interventionist” the Fed is (the more they change things from the way they would be without interference) the more bubbles there are.

What is the Fed doing right now?

The Fed is artificially driving interest rates to zero by launching QE1 and QE2, two quantitative easing programs that conjure up a combined $1.85 billion to spend on federal bonds.

What is the Fed’s goal with this action?

The Fed is driving down long-term interest rates.  Short term interest rates were already being artificially held at 0.  This is supposed to make it easier for people to assume the risk of taking out loans.  People with home mortgages can refinance, slowing foreclosures.  It also helps the United States stock market weather difficult times.

What unforeseen consequences does this have?

1) When long-term interest rates are 0, banks have very little incentive to lend money out to entrepreneurs because they will be making very little profit if the business is successful.  This means less startups are being created and job creation is pitiful.  It drives forward a jobless recovery, which benefits investors but not wage-earners.

2) Bubbles are created.  This is a huge intervention in the market.  Somewhere, an ENORMOUS bubble is being created.  It will not be perfectly clear where this bubble is until it pops.  This is exactly the Fed policies that helped create the .com bubble burst in the early 2000s and the housing bubble burst in 2008.  But this interference is much greater and the bubble will be MUCH larger.

3) Inflation.  Money was conjured out of thin air on a computer screen.  Ben Bernanke hates when people use the term printing money but that is essentially what is happening.  We are monetizing the debt — printing money to pay our bills.  This is BAD for inflation.  Inflation is already striking all over the US economy.  It is hitting the gas pump first but it is going everywhere.  The international food index has doubled.  Other commodities are racing up.  The inflation hit hard internationally first but it is coming here very soon.

4) International conflict.  The citizens of many poorer nations could not afford to feed their family when rates went up.  Many rose up in armed rebellion against the status quo.  This sudden inflation-driven hunger helped launch the Arab Spring, which needs its own post.

What does Barack Obama have to do with this, if anything?

It is radically inadvisable for fiscal policy to create monetary policy.  Barack Obama’s federal budget was so big and so unmanageable that Congress essentially had to go across the street to the Fed in order to pay its bills.  There may be no new taxes but inflation is coming.  As long as Congress has the limitless credit card of the Fed sitting across the street, they use the credit card and print the money to pay the bills.  And no dollar in America on the fiat system is safe.

Ronald Reagan once famously said, “Inflation is as violent as a mugger, as frightening as an armed robber and as deadly as a hit man.”  It is time for the American people to seize back control of their monetary policy and make the dollar as good as gold.