Chinese Catholics Are Called To Follow Christ Even To Death

Posted on December 7, 2011 by The Catholic Populist 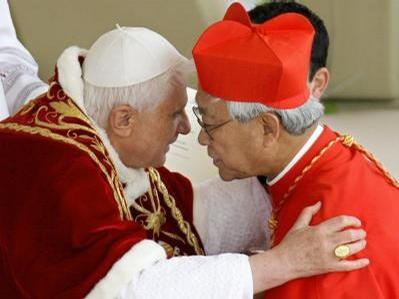 Henry II of England nominated Thomas-a-Becket to be Archbishop of Canterbury because he firmly believed that Thomas would be loyal first to the State and second to Rome.

We know how that turned out.

After bitterly fighting with the formerly easy-going Thomas, Henry growled to his advisers: “Will no one rid me of this troublesome priest?”

Someone did.  Thomas, chosen to be a tool of the State, grew a backbone and became a martyr for the Faith.

During Mao’s “Cultural Revolution” Catholicism was made illegal.  The millions of Catholics in the country were put into labor camps.  Mao put about 60 million citizens to death.

The Communists rounded up priests and Catholics and tried to register them with the Communist regime as part of the Patriotic Association.  Many Catholics risked torture, brutality, and martyrdom by instead staying “underground.”  These Catholics were ministered to by the Vatican Congregation for Evangelization, which handled the underground Church as a mission Church operating under historic persecution.

In order to agree only to suitable candidates, the Vatican worked in consultation with the “underground” Catholic Bishops to give canonical jurisdiction to some candidates who were often first appointed by Bishops from the CCPA.  Until 2000, the Vatican process for reviewing candidates was very thorough.  In 2000, according to Cardinal Zen, the leading Catholic critic of the Chinese government, the Vatican became too accommodating to the Communists — allowing unsuitably weak candidates to become Bishops.  Now, the truth is that some CCPA Bishops are more loyal to Rome.  Others are more cronies of the Communist regime.  However, in the last year, the Vatican has grown a stronger backbone, insisting that Bishops can only be appointed with the approval of Rome.

The Communists have responded by upping the ante — appointing schismatic Bishops, an action that incurs canonical automatic excommunication for the Bishop ordained and those participating in the ceremony (as occurred also with SSPX).  The matter is complicated by the fact that Bishops are often pressured into participating in illicit ordinations.  This confrontation between Rome and Beijing is forcing CCPA Bishops to choose sides.  Some CCPA Bishops are finding their inner Thomas-a-Beckett and refusing to participate.  If Beijing continues to force this confrontation with Rome, they will increasingly force the Bishops more loyal to the CCPA into formal schism.  This heavy-handed strategy may not work as the Communists plan.  The more schismatic and excommunicated the CCPA becomes, the less influence the Communists may have on authentic Catholicism.

Currently, about 8 million Catholics are “underground” — ready to suffer martyrdom if apprehended.  And this number is swiftly growing.

About 5 million Catholics attend Mass with the CCPA.

In other words, Catholics represent about 1% of China’s population.

Cardinal Zen has been aggressive about speaking up about this confrontation and the danger and opportunity it presents.  Authentic Christianity, following Christ to the end — even, if necessary, to death — is the calling of every Catholic.

As the Communists force the CCPA increasingly into schism and excommunication, we must pray that Chinese Catholics associated with the CCPA — particularly the Bishops under the watchful eyes of the Communist regime — find the courage to find their inner Thomas-a-Becket and remain unfailingly loyal to Rome.

And may Christ lead them along the path to Greatness.